San Diego Union Editorial Board Doesn't like "Paternalism" of AB-438

A bill that imposes specific requirements on the privatization of public libraries. 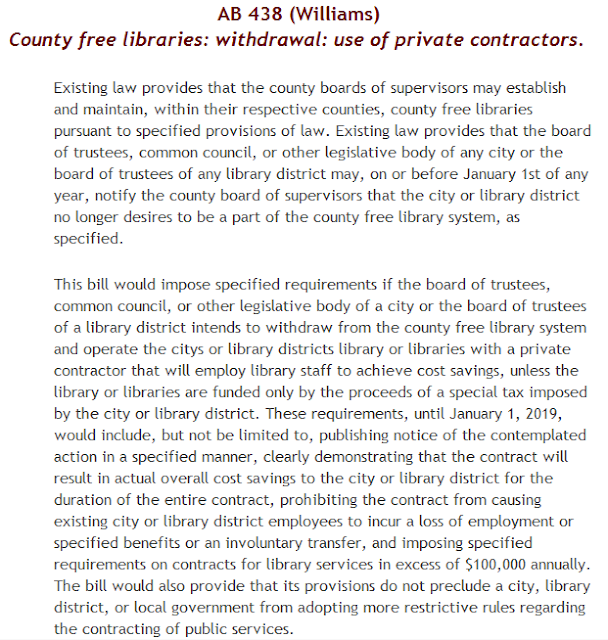 Excerpt: The librarians were expressing their full-throated support for AB 438, a bill that would make it much more difficult for private firms to win contracts to manage public libraries, a trend that many in the library community see as a threat.

Authored by Assemblyman Das Williams, D-Santa Barbara, AB 438 cleared the Assembly on a partisan vote and is working its way through the Senate.

An early version of Williams’ legislation required a public election before library services could be outsourced to a private company.

The assemblyman dropped that sky-high hurdle, but AB 438 retains plenty of game-changing hostility toward outsourcing. For example, the legislation requires that a city or county, before it hires out public library services, provide protections from “involuntary employee displacement” as well as “protections from a contract that’s approved solely on the basis that savings result from lower wages.”

The paternalism of Williams’ bill is striking. The assumption appears to be that local governments can’t be trusted to watch out for themselves or their citizens. Not surprisingly, the League of California Cities opposes the legislation. On the other hand, union groups like the California Labor Federation support it.