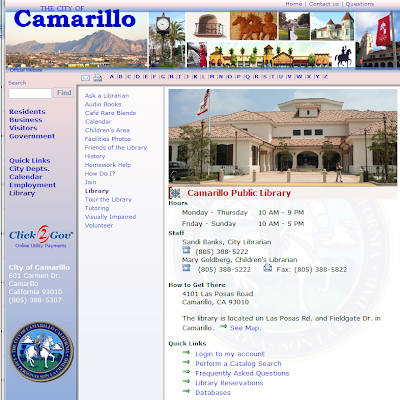 Excerpt: In Camarillo, city officials cast themselves as victims of their own success. Their showplace library drew more patrons than the smaller one it replaced in 2007 but, as a result, the fees they paid to be part of the county's system increased. Unable to negotiate lower rates, Camarillo turned to the private company, which promised savings of about $700,000.

"We wanted better budget and operational control, a better say over what we were purchasing for the collections," said Bruce Feng, Camarillo's city manager. "And the savings can only help everyone."

Santa Clarita officials, too, felt they were giving a lot more to their county system than the county was delivering in library services. It was especially unfair, said assistant city manager Ken Striplin, because Santa Clarita residents pay a special library tax.

The switch will save the city $1.2 million, Striplin said, "the vast majority" of it from no longer having to contribute to library workers' county pensions.

Stevens, of the American Library Assn., was skeptical. "It's a great sales job," she said, "and cities are falling for it."