Library Director Kristie Wilson sends out an alert to county residents who love and value libraries. Let's hope a large number of them speak up! 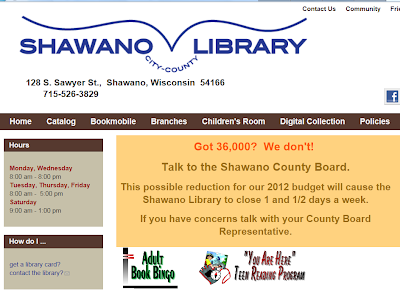 Faced with a proposed $36,000 cut in county funding, Library Director Kristie Wilson said the library might be be closed an additional day and a half each week, reducing its hours from 55 to 42, and might have to let go three or four part-time employees.

Wilson, however, is appealing to library patrons to spread the word and to tell the County Board that the proposed cuts are too severe. The marquee in front of the library urges people to speak to the board, and the library staff is also reaching out through social media such as Facebook.

Wilson was informed in July that the library’s allocation would be reduced by $6,500. Then she found out Aug. 2 that her department was being cut by more than five times that amount, or about 8 percent from its 2011 budget of $460,000.