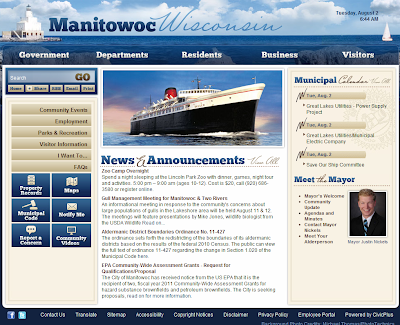 Excerpt: Regardless of process or personnel used in preparing the budget, Nickels has told city managers what needs to be achieved, in the wake of collective bargaining changes imposed by the state, and an accompanying 8 percent decline in shared revenue.

"I am asking each department to come in with a true 10 percent reduction, which can either be offset by revenue (increases) or reductions in expenditures … but any revenues increased will have to be nontax (hikes)," Nickels said.

He noted the state's 2011-13 Wisconsin biennial budget prohibits property tax levy increases, unless there is considerable growth in a community's tax base, typically by major new construction.

Nickels again lamented that police, fire and transit workers are exempt from having to pay additional health insurance premiums and make pension contributions, as other union workers and nonrepresented employees now must do.

As of now, there's no mention in the article or evidence on the city's website of invited public input into the 2012 budget development process.
Posted by Retiring Guy at 6:47 AM