With so much attention focused on California's budget troubles, Texas has been able to fly under the radar.  (How unfortunate that Molly Ivins is no longer with us.) 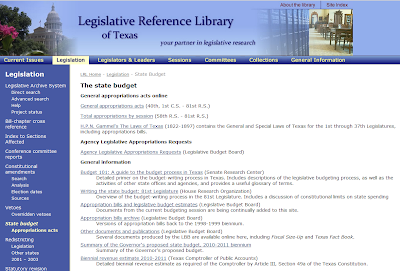 Amid the election year barnstorming, projections of a budget shortfall now topping $24 billion were often downplayed, dismissed or glossed over with platitudes.

But the true magnitude of the problem will begin to take shape Monday, when Comptroller Susan Combs releases the long-awaited estimate of how much money Texas will collect during the 2012-13 budget years.

That estimate dictates how much lawmakers will have in the general operating budget to spend on education, prisons, health and human services and a slew of other state functions.

Budget-watchers expect the state will bring in far less in taxes and fees than the $87 billion that covers the current general operating budget, never mind the $99 billion that agencies say is needed to maintain state programs and services at their present level. Lawmakers have vowed to balance the budget without raising taxes.

They are also leaving untouched the $9 billion rainy day fund, at least at this early stage, since there is no guarantee that any of that money will be available for use. Assembling the necessary votes to tap the fund might be tough given the surge of legislators who ran campaigns advocating shrinking government.

So the upshot could be a level of cutting unprecedented in several decades at least, said Eva DeLuna Castro , a budget analyst with the Center for Public Policy Priorities, which advocates for low-income Texans.