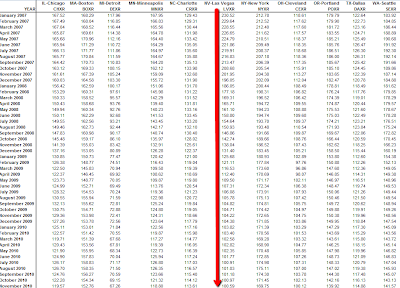 Excerpt: A second wave of falling home prices is battering some cities that had escaped the worst of the housing market bust.

Prices in Seattle, Charlotte, N.C., and Portland, Ore., have hit their lowest points since peaking in 2006 and 2007. Denver and Minneapolis are nearing new lows. High unemployment and rising foreclosures are taking a toll even on markets that never overheated during the boom years.

Home values are dwindling in nearly every American market. Prices fell in November in all but one of the 20 cities in the Standard & Poor's/Case-Shiller index released Tuesday. Eight of those markets hit their lowest point since the housing bubble burst.

The damage from the real estate bubble has spread well beyond Las Vegas, Phoenix and Miami, which built frantically during the mid-2000s, and is sapping prices from coast to coast. In many places, price.