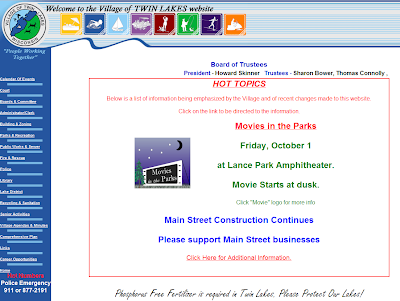 LINK
(Population 5,677)
Link to October 18 West of the I post, "Twin Lakes delays decision on library separation until December".

Excerpt: Community Library Board President Ken Mangold asked the Twin Lakes Village Board to give his board another 18 months to continue to make progress in bringing more equitable services to the village before Twin Lakes gives separating further consideration.

What Mangold got was a Dec. 1 deadline to come up with an agreement between the five member municipalities that would guarantee that tax money from Twin Lakes and Randall would come back to the branch meant to serve those municipalities.

The Village Board was considering withdrawing from the Community Library at the urging of its representatives on the board, Michael Mahoney and Sharon Bower, who also is a village trustee. The village could then form its own library.