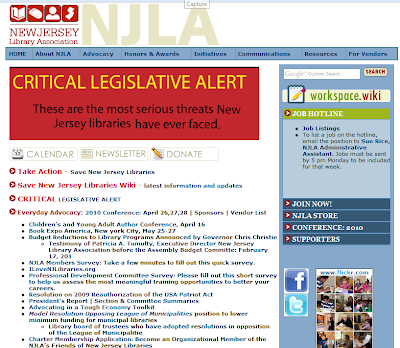 Excerpt:    With around 27,000 volumes and a single location, the Audubon Public Library is one of New Jersey's smaller libraries. A resident interested in an academic text or the early work of an obscure novelist would have to request the volume through the state's interlibrary loan system.

That program - which makes larger libraries' vast troves available to their smaller brethren, and vice versa - is among a number of popular services jeopardized by funding cuts in Gov. Christie's proposed budget, library advocates say.

"Someone likes James Patterson, we have the most recent novel. But one of his older novels, we'd usually have to borrow," said Audubon library administrator Kathy Ostberg. "We're a small library. We depend on those services."

Christie's plan would cut funding - which also pays for items such as database subscriptions and adult-education classes, and provides a proportion of individual library budgets - by $10.4 million, a 74 percent reduction from last year, according to the Office of the State Librarian.

"This is not shared suffering," said Pat Tumulty, executive director of the New Jersey Library Association, a nonprofit advocacy group.
Posted by Retiring Guy at 10:27 PM