Charlotte Mecklenburg: "Save Our Libraries Sunday" 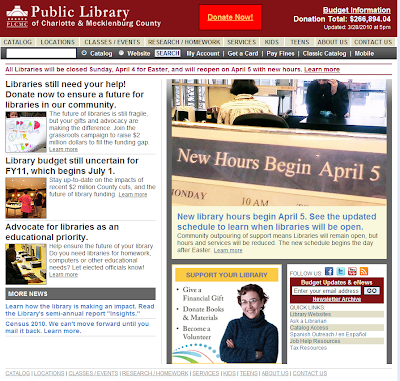 Excerpt: It was that way all over Mecklenburg on Sunday, a day set aside as "Save our Libraries Sunday."

Ministers at several churches urged their congregations to give to or volunteer at libraries. Patrons drove to the seven regionals to donate - one child slipping in an envelope with a dime. Some gave a handful of change. Others checks.

In all, $6,094.82 was raised Sunday - with more likely to come in during the week. In all, the Friends' grassroots effort has raised $266,894.04, said Karen Beach, the library's director of community engagement.

Every dollar will go to keeping branches open and restoring services slated for cuts through June 30, said Harriet Smith, president of the Friends.

Charlotte Mecklenburg libraries haven't seen such large-scale reductions since the Great Depression. (3/17/2010)
Posted by Retiring Guy at 8:47 AM