In Wisconsin, you couldn't ask for better weather in March. 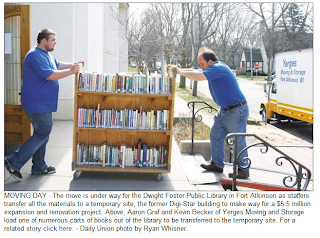 Excerpt:    Cleaning out her office, library director Connie Meyer found a metal lockbox chock full of Fort Atkinson library history. The lockbox itself had been stored on the top shelf of a built-in cupboard in her office.

An employee since 1976 and library director since 1992, Meyer recalled being told by now-retired director Mary Gates that there were many items stored in the cupboard that should not be thrown away.

Through the years, Meyer had found blueprints, presumably for the first few phases of the library building, which was first constructed in 1916 and later expanded in 1931. However, she never had looked further.

Stepping up on a chair Wednesday, Meyer pulled out all the materials, including blueprints, and found the lockbox.

Within it were the documents collecting the history of the early stages of the library and the different land acquisitions associated with it.

Records show that the library originally was built in 1916 and it underwent two additions: in 1931 and 1983. In all cases, the library has expanded during a downturn in the national economy.