100 Years of Frank Sinatra: "There Are Such Things"


First recorded in 1942 with the Tommy Dorsey Orchestra, "There Are Such Things" became one of the biggest hits of 1942, and Frank Sinatra's most popular -- #17 for the year, according to the website Popular Song.  It reached the #1 position on the Billboard pop singles chart.

Credits for the song go to Stanley Adams (English lyrics for 'What a Diff'rence a Day Makes'), Abel Baer ('Am I to Blame?'), and George W. Meyer ('For Me and My Gal').

This photo was taken while Dad served as a intern at Emanuel Lutheran Church in Hartford, Connecticut, about 30 miles from Mom's hometown of Springfield, Massachusetts.

From the pose, however, it doesn't appear that anything "special" is going on between  the two of them.  But then Dad was in the seminary at the time and was never prone to public displays of affection.  I don't know the woman's name; there is nothing written on this album page or on the back of the photo.

If nothing else, they certainly look happy to be in each other's company.  There are such things. 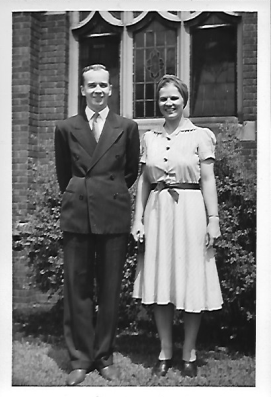