This is what happens when people don't pay attention.

Your local government may be taken away from you. 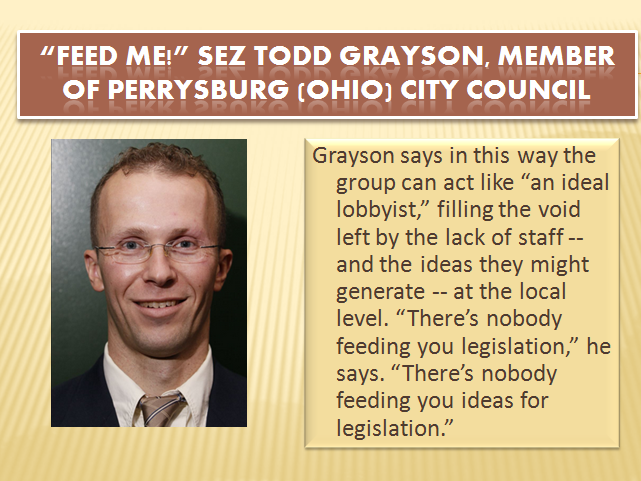 I wonder what city department heads and other staff members, as well as the members of the various boards and commissions have to say about being, in essence, referred to as  'nobodies'? \

It appears to me that someone is too lazy, to too inconvenienced, to tap into valuable and varied resources to be found at the local level.

The ALEC model of meddling with state government has resulted in abominable legislation, much of tramping on local control.  It would be a tragedy to see this top-down, mind-my-business-or-else mentality worm its way into the operations of municipal councils and village boards..

Yes, the key word is "lockstep'.   A review of 2011-2012 voting records by a University of Wisconsin academic demonstrates that many Wisconsin legislators are marching in lockstep with the American Legislative Exchange Council (ALEC). Sixty-one Wisconsin politicians -- or 46 percent of the legislature -- voted with the ALEC agenda one hundred percent of the time.

Paying attention. The most important group, I’m pretty sure, is the American Legislative Exchange Council (ALEC), which was founded in 1973 by Henry Hyde, Lou Barnett, and (surprise, surprise) Paul Weyrich. Its goal for the past forty years has been to draft “model bills” that conservative legislators can introduce in the 50 states.

Don't forget the local Toledo radio station that promotes ALEC and other right wing extremists. Here's a interview with Todd on WSPD. http://www.wspd.com/media/podcast-fred-lefebvre-podcasts-Fred/619-perrysburg-city-councilperson-tod-grayson-24923301/