Sunny-Day Flooding in Miami Beach: The Everyday Reality and the Political Denial

The everyday reality. The sunny-day flooding was happening again. During high tide one recent afternoon, Eliseo Toussaint looked out the window of his Alton Road laundromat and watched bottle-green saltwater seep from the gutters, fill the street and block the entrance to his front door.

“This never used to happen,” Mr. Toussaint said. “I’ve owned this place eight years, and now it’s all the time.” 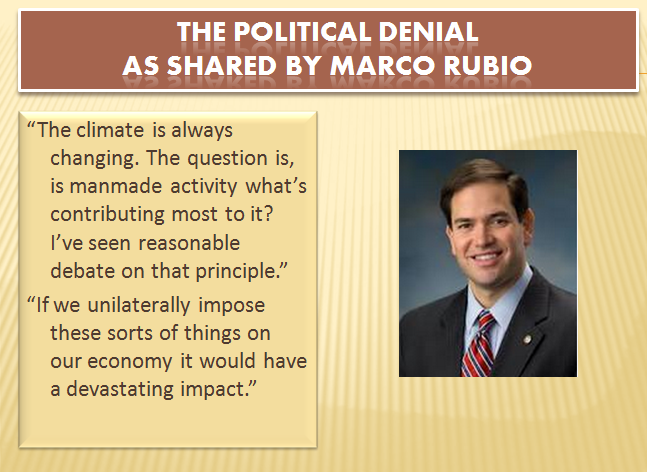 Mouthing the words from the Republican playbook.   (Bold type added.)  But three prominent Florida Republicans — Senator Marco Rubio, former Gov. Jeb Bush and the current governor, Rick Scott — declined repeated requests to be interviewed on the subject. Mr. Rubio and Mr. Bush are viewed as potential presidential candidates. Political analysts say the reluctance of the three men to speak publicly on the issue reflects an increasingly difficult political reality for Republicans grappling with the issue of climate change, particularly for the party’s lawmakers from Florida. In acknowledging the problem, politicians must endorse a solution, but the only major policy solutions to climate change — taxing or regulating the oil, gas and coal industries — are anathema to the base of the Republican Party. Thus, many Republicans, especially in Florida, appear to be dealing with the issue by keeping silent.

Another solution:  Stronger codes to have buildings and homes built higher off the ground.