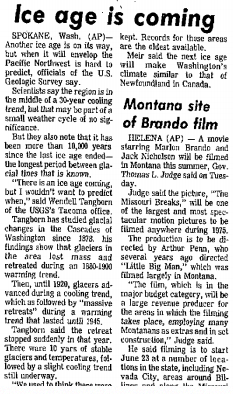 Washington State's Glaciers are Melting, and That Has Scientists Concerned. (Common Dreams, 8/29/2006)

Excerpt: Since the first stirrings of the Industrial Revolution 150 years ago, glaciers in the northern Cascades have shrunk by 40 percent, and the pace is accelerating. The South Cascades Glacier, one of the most studied in the nation, has lost roughly half its mass since 1928.

In the Olympic Mountains, glaciers have lost about one-third of their mass.

Pictures of retreating glaciers.  A century of melting.

Could Wendell have predicted in 1975 that The Missouri Breaks would be a critical and commercial failure?