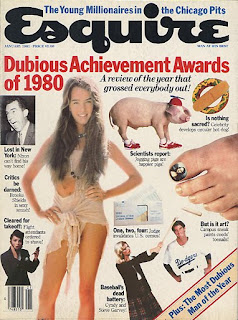 Once upon a time,
the most achingly funny read of the year.
Link to December 20 Technologizer post, "This Dumb Decade: The 87 Lamest Moments in Tech, 2000-2009".

Excerpt: If ever a decade began dumb, it was this one.* When clocks struck midnight on January 1st and the dreaded Y2K bug turned out to be nothing but a mild irritant, it proved once again that the experts often don’t know what the heck they’re talking about.

Which was a relief–and a fitting way to kick off the technological era we’ve lived in ever since. Yes, it’s been an amazing time. But it’s also seen more than its share of misbegotten decisions, bizarre dramas, pointless hype, and lackluster products and technologies–often involving the same people and companies responsible for all the amazing stuff.

So–with a respectful tip of the Technologizer hat to Business 2.0 and Fortune’s 101 Dumbest Moments in Business and, of course, to Esquire’s Dubious Achievement Awards–let’s recap, shall we?
Posted by Retiring Guy at 11:30 AM