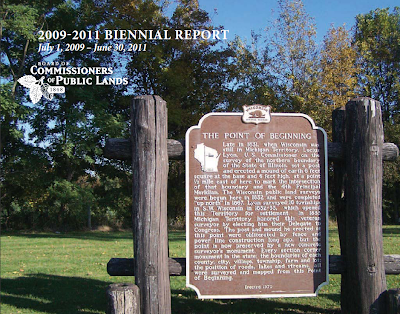 Summary of Trust Assets:
Common School Fund.
(From page 10.)
Origin. About 1.5 million acres granted by the federal government in 1848.  (Sidebar:  "A brief history of education in Wisconsin" is found at The Wisconsin Mosaic.)

Additions to principal.  In fiscal years (FY) 2010 and 2011, slightly more than $63.2 million was added through the collection of civil and criminal fines, fees, and forfeitures, and proceeds from the state’s Unclaimed Property Program (As set forth in Article X, Section 2 of the State Constitution)

Earnings distribution.   Each year, after operating expenses are subtracted, net earnings are forwarded to the Department of Public Instruction for distribution as public school library aid.  These funds often represent most, if not all, of a school district’s library budget.   A total of $65.6 million in earnings was distributed in FY 2010 and 2011.
Posted by Retiring Guy at 9:11 AM

Labels: Board of Commissioners of Public Lands, Common School Fund