Let's Call This Bill Exactly What It Is: An Unfunded Mandate

Among many other, infinitely more colorful designations.  (2011 Senate Bill 148.) 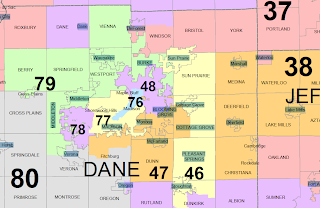 Excerpt: A statewide redistricting plan that legislators in Madison are expected to discuss today could cost the City of Sheboygan $57,000 for three new polling places in the next election and then an additional $27,000 in ongoing expenses for every election after that, local officials say.

"You have to consider what this will do to the municipalities — we need the tools to be able to efficiently and cost effectively handle the election process," City Clerk Sue Richards wrote in an e-mail Monday to Sen. Joe Leibham, R-Sheboygan; Rep. Mike Endsley, R-Sheboygan; Rep. Steve Kestell, R-Elkhart Lake, and Rep.Dan Le Mahieu, R-Cascade.

This would result in oddly fragmented voting districts with small numbers of people. And that would require communities to print more ballots and spend more money running elections for the next 10 years.

"We would encourage (lawmakers) to slow down and give everybody a chance to understand what these changes mean," he said.

Helen Nagler, Outagamie County Board chairwoman, said her county could be forced by the state to create a plan that makes less sense and is more expensive for taxpayers than the plan it's working on now.

Letter from the City of Milwaukee signed by Mayor Tom Barrett and Judiciary and Legislation Committee Chair Ashanti Hamilton.