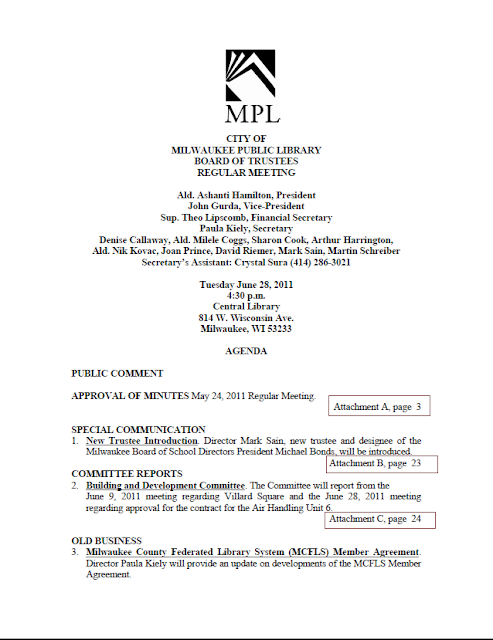 Private and public facilities that are not specifically exempted from the law may ban guns only by posting signs to that effect. Publicly owned grounds, such as parks, cannot ban firearms.

Paula Kiely, secretary of the board, said during the trustees' meeting that she believes this clause means that the library will not be able to restrict firearms from its courtyards.

During the meeting, the trustees expressed their disappointment with the final list of exceptions to the law, mentioning that they had hoped that libraries would be among them. Although a formal vote was not taken, the trustees unanimously opposed allowing guns in the library.

The statute itself contains this section:
Section 83. 943.13 (1n) of the statutes is created to read:
SB90,53,135 943.13 (1n) A person is guilty of a Class C misdemeanor if he or she, while carrying a firearm, enters or remains in any part of a building that is owned, occupied, or controlled by the state or any local governmental unit, excluding any building or portion of a building under s. 175.60 (16) (am) 1., if the state or local governmental unit has notified the actor not to enter or remain in the building while carrying a firearm or with that type of firearm. This subsection does not apply to a person who leases residential or business premises in the building or, if the firearm is in a vehicle driven or parked in the parking facility, to any part of the building used as a parking facility.

And as to signage, the bill text reads:
Section 85. 943.13 (2) (bm) of the statutes is created to read:
SB90,54,75 943.13 (2) (bm) 1. In this paragraph, "sign" means a sign that states a restriction imposed under subd. 2. that is at least 8.5 inches by 11 inches and colored orange as described in s. 29.301 (2).SB90,54,148 2.
For the purposes of subs. (1m) (c) 2. and (1n), an owner or occupant of a part of a nonresidential building or the state or a local governmental unit has notified an individual not to enter or remain in that part of the building while carrying a firearm or with a particular type of firearm if the owner, occupant, state, or local governmental unit has posted a sign that is located in a prominent place near all of the entrances to the part of the building to which the restriction applies and anyindividual entering the building can be reasonably expected to see the sign.

Related post:
Dane County and City of Madison propose restrictions on concealed carry. (6/18/2011)
Posted by Retiring Guy at 7:08 AM