Excerpt: The whimsically painted but broken down Bookmobile, owned by the Fond du Lac Public Library, is another victim of a failing economy and its negative impact on municipalities.

Library Director Ken Hall said the Public Library can no longer foot the bill for the Bookmobile, which amounts to around $36,000 a year.

"The problem comes down to funding and the uncertainty of future public funding," Hall said.

According to the Wisconsin Department of Public Instruction, Gov. Scott Walker's proposed budget for 2011-13 includes a 10 percent cut each year in state funding for public libraries [make that public library systems*], cuts of 11.6 percent in the first year and 6.6 percent in the second year in school library funding, as well as a provision that would eliminate a requirement that local funding for public libraries be maintained, at minimum, at the average of the prior three years.

The Rosendale Bookmobile has been in operation for 16 months and contains about 2,500 books available on loan. Hall said he made the choice to end Rosendale's services over the library's other Bookmobile, parked at Festival Foods on East Johnson Street, because usage at the Fond du Lac location was 34 percent higher. 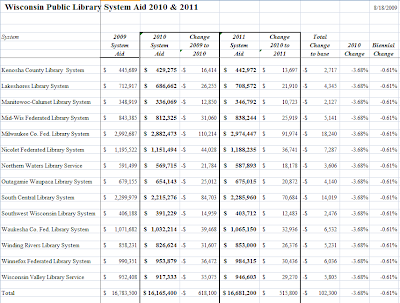 Related article:
Bookmobile assigned a permanent home in Rosendale.  (2/7/2010)
Posted by Retiring Guy at 7:17 AM