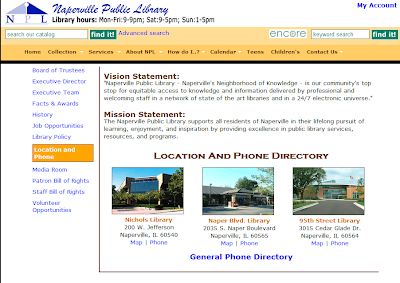 Excerpt: Naperville’s three public library facilities could each close for five additional days during the coming fiscal year while also dealing with reductions in their circulation, reference and program departments.

During a lengthy workshop Wednesday night, library board members discussed the possibility of closing each of the three libraries — Nichols, Naper Boulevard and 95th Street — for five additional days at a projected savings of $35,000 a day or $175,000 for the year.

While all of the cuts total $350,000, the board would present the city council with $250,000 in savings while hoping to keep roughly $95,000 to put into a merit pool and charge staff with finding more should the city decide to give nonunion employees up to 2 percent raises.

Paul, We would appreciate it if you would also link to this article from Patch. http://naperville.patch.com/articles/library-board-explores-additional-budget-cuts
It offers a more accurate picture of the meeting. Thanks.
Susan Greenwood
Naperville Public Library