The Struggles Continue at the Seattle Public Library 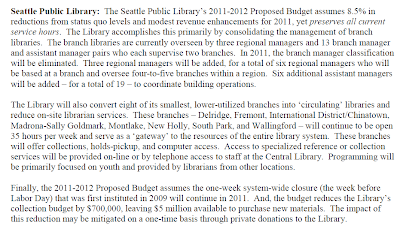 Excerpt: As the city's new head librarian, hired early last year, she [Susan Hildreth] didn't get one minute to bask in the afterglow of the "Libraries for All Campaign" and the hoopla that surrounded it. From the beginning, she instead has had to grapple with more basic matters like how to keep the doors open for a library system facing painful budget cuts as city funds continue to dry up in a still-sluggish economy.

Now Seattle's libraries may have a new challenge, this one involving Hildreth herself.

The same late-September week Mayor Mike McGinn announced deep cuts to the library system's budget and an overhaul of the system's management, President Barack Obama tapped Hildreth to be director of the Institute of Museum and Library Services, a federal agency that gives grants for educational programs to the nation's 123,000 libraries and 17,500 museums.

On top of the financial crisis, the libraries might be left without a strong advocate at the helm who can push for much-needed funds at City Hall and nurture relationships with a public already frustrated by cuts to operating hours at branches and changes in services aimed at addressing the reversal of fortunes.