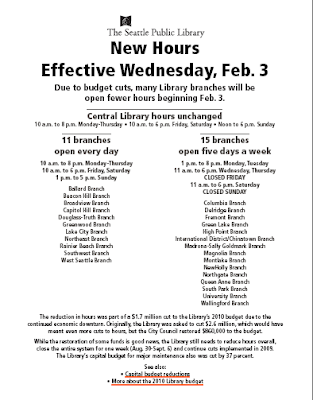 Excerpt: Fifteen branches of the Seattle Public Library will reduce their hours beginning this week as part of budget cuts adopted last year by the Seattle City Council.

Eleven branches will be open 60 hours a week, seven days a week. For those branches, that's an increase of 5 hours a week, a move to provide services to library-goers at branches where hours are being reduced.

The council, in its budget negotiations, made a big priority of saving library hours. Members ended up restoring about $860,000 in cuts proposed by the mayor. Beginning Wednesday, the majority of library branches will be open just five days a week and will have reduced hours the days they are open. Currently, most are open six or seven days a week.