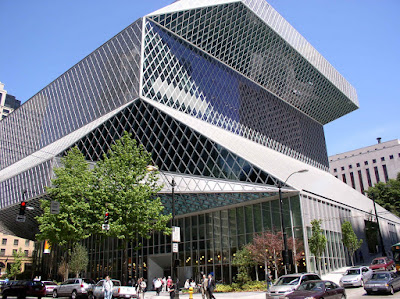 One of the world's most beautiful libraries.
Link to October 26 Lit Life column in the Seattle Times, "Library cuts go too deep". (via Lazyfeed, eventually)

Excerpt: Since 2000, library usage in the city has soared; from 4.5 million in-person and virtual visitors to 13.2 million in 2008, according to the library.

Nevertheless, responding to Mayor Greg Nickels' directive to city departments to cut budgets in response to a $72 million revenue shortfall, the library is proposing a 23 percent reduction in library hours.