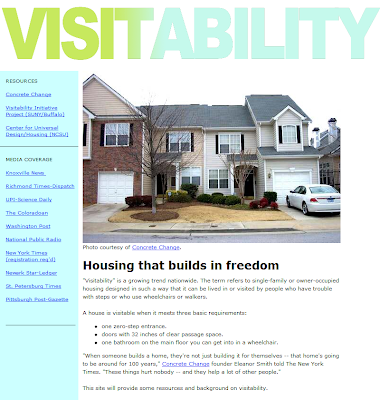 LINK
Link to October 25 column by Daniel Rubin in the Philadelphia Inquirer, "Access is her lifelong cause.

'Her' being, Eleanor Smith, the grandmother of the visitability movement.

Excerpt:   Her goal is to get builders to start thinking about those who have trouble walking on their own. Odds are we'll all be there one day.

At age 3, Smith contracted polio. In the 1940s, Eureka, Ill., had no curb cuts, so the library and the grocery store were not open to her. In her first apartment, the door to the bathroom was so narrow that to get to the toilet she had to crawl.

She taught college-level literature and English as a second language and was working as a social worker in the mid-1970s when she heard an architect say: "Disability is not caused by the physical condition; disability is caused by the built environment."

Those words changed her world.

"I realized that people actually make decisions that let me get into one building and not another," she said. "It's kind of obvious. But it wasn't to me then. I thought, 'If what he says is true, it's horrible and has to be changed.' "

She started reading magazines such as the Disability Rag, an unapologetic advocate for basic rights, and found her voice. "Most disabled people I knew weren't angry," she says. "They were just coping."
Posted by Retiring Guy at 6:39 AM