Steelerstahl Must Have Ben on his Mind

You were always on my mind. 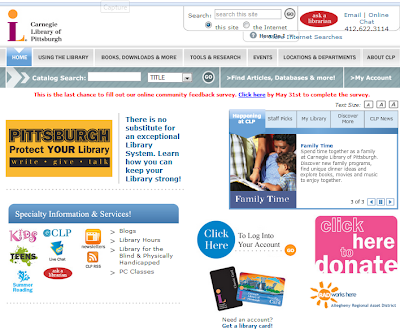 Excerpt:   Mayor Luke Ravenstahl plans to veto a measure giving the Carnegie Library of Pittsburgh $640,000 because library officials have not assured him all branches will remain open, his spokeswoman said.

"We have no promise. We have no commitment," mayoral spokeswoman Joanna Doven said. "This isn't popular, but we're going to do what's right."

City Council on Wednesday approved the money for the library with an 8-0 vote. Council President Darlene Harris, who had questions about the library's finances, abstained.

Council would need six votes to override the veto.

"God bless him," said Councilman Bruce Kraus, who introduced the measure with six co-sponsors to ensure its veto-proof passage. "We've heard loud and clear the importance of the Carnegie Library of for the quality of life of the residents of Pittsburgh."

No council member said yesterday that his or her vote would change.