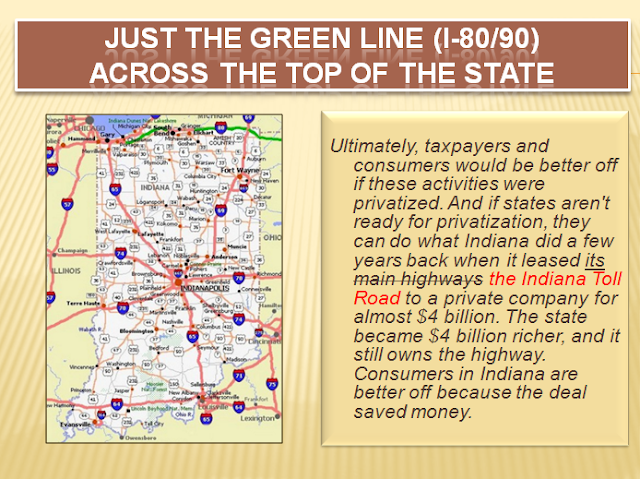 As reported (with correction) in Is infrastructure spending a good investment?  (Reason, 12/3/2015)

And how did this deal work out?

Well, first of all, the original operator filed for bankruptcy last year.


Not the first time for this outcome.  The Indiana road company isn’t the first to seek creditor protection since the financial crisis. Operators of the South Bay Expressway, a 10-mile toll road near San Diego, and the 16-mile Southern Connector in Greenville County, South Carolina, each filed for bankruptcy in 2010 after experiencing low traffic.

The Indiana Toll Road and the Dark Side of Privately Financed Highways.  (Streetsblog USA, 11/18/2014)


Buyer beware.  At a time when government and Wall Street are raring to team up on privately financed infrastructure, a look at the Indiana Toll Road reveals several of the red flags to beware in all such deals: an opaque agreement based on proprietary information the public cannot access; a profit-making strategy by the private financier that relies on securitization and fees, divorced from the actual infrastructure product or service; and faulty assumptions underpinning the initial investment, which can incur huge public expense down the line. Though made in the name of innovation and efficiency, private finance deals are often more expensive than conventional bonding, threatening to suck money from taxpayers while propping up infrastructure projects that should never get built.


The highway is now operated by Australia's IFM Investors


Not the only problem with this model.  Toll roads backed by private financing have struggled in recent years because of heavy debt burdens put in place on the assumption of rising traffic and toll revenue. American Roads LLC, which operates toll roads in Alabama and Michigan, restructured its debt in chapter 11 protection in 2013. The Australian operator of the Pocahontas 895 handed over the 8.8-mile toll road outside of Richmond, Va., to a group of its European creditors, also in 2013.


Related posts:
Lesson two in privatization.  (7/7/2012)
A lesson in privatization: Welcome to Hallandale Beach Florida and the world of aquatic risk management.  (7/5/2012)
Posted by Retiring Guy at 7:37 AM