Somebody certainly loves to hear herself talk. 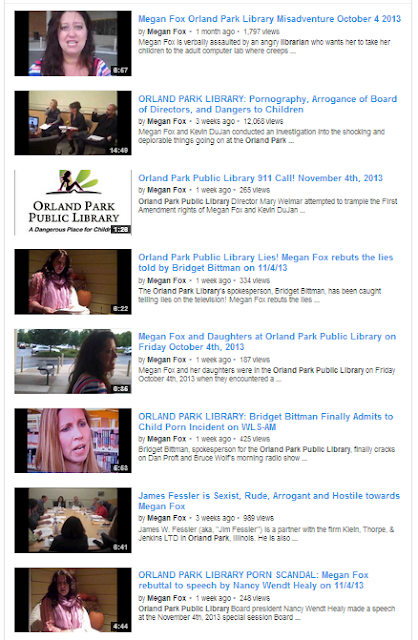 Perhaps not as reassuring as she wanted to be: "I don't think it was life threatening, but I really don't know the details of it," library spokeswoman Bridget Bittman said.

From the September 15, 2008, minutes of the Orland Park Public Library board of trustees meeting.   Director Wsol introduced Carole Hillman who is the candidate for Trustee on the Board to fill Dan Muntner’s position.

From the April 20, 2009, minutes of the Orland Park Public Library board of trustees.
Trustee Hillman announced that PBS is airing a 5 part program on American Indians which she is viewing and is exceptional. Trustee Hillman asked if we could get this five part series on DVD for the library. The Director will look into this.

Trustee Hillman has worked with Junior Great Books and Advanced Great Books. Can we host this program for children and adults? The Director will look into this.  (Not sure if these programs were offered, but the library certainly has plenty of other activities going on.)

Health issues aside, I suspect Hillman lacked the necessary leadership characteristics and behaviors to lead the library board through its current controversy.

Wonder if this is the same Carole Hillman?

The article notes that Hillman was elected to the board in April 2009, but a review of the minutes indicate otherwise.