Eastern Shores Library System merger would be first. (Sheboygan Press, 10/17/2012)
Excerpt:   If a merger takes place, it would be the first one in the state’s history, said John DeBacher, director of public library development for the state Department of Public Instruction’s Division for Libraries and Technology. In fact, it wasn’t until 2006 that legislation even allowed for the concept.

June 4, 2011.
From the Eastern Shores Library System Board of Trustees minutes.
8. Interest in Library System Merger Discussions with MCLS: Peterson discussed the pros and cons’ MCLS has merging with ESLS. She gave background about their staff, member libraries, services provided, and population served. MCLS have appointed an Ad hoc Committee to investigate the merger. Trustees discussed possibilities of merging. The Search Committee will pursue the idea and process of a merger.

July 30,2012
From the Eastern Shores Library System Board of Trustees  minutes.
6. Merge/Director Search Committee Report: Nuernberg reported on the June 28 meeting. At the Committee’s direction, he sent letters to adjacent library system board presidents asking if they were interested in exploring merging with ESLS and response by July 25, 2012. The following library systems responded: Mid-Wisconsin, Manitowoc Calumet, Winnefox, and Waukesha. Mid-Wisconsin was the only system to decline exploring a merger.

Nuernberg also sent letters to ESLS member board presidents informing them of the board exploring a merger. Trustees received copies of the letters.

Nelson moved to direct the board president to contact a consultant to explore the possibility of merging with an adjacent library system, and prepare library system budgets. Nuernberg will present a proposed engagement letter to the board at its next meeting. Seconded by Rollings, motion carried by voice vote. 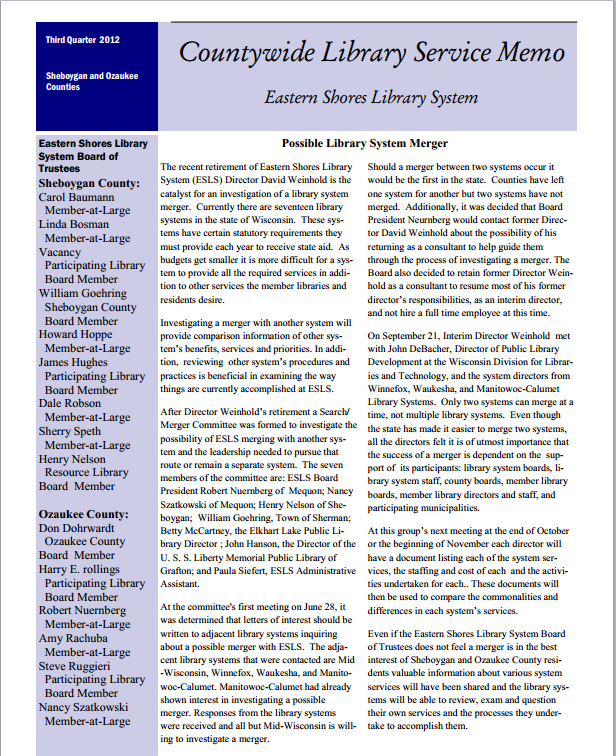 LINK
Posted by Retiring Guy at 9:08 AM