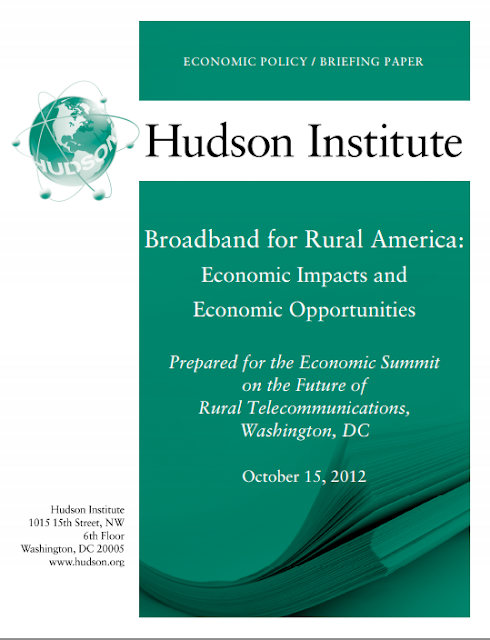 From page 1 of the report. Accordingly, our nation faces a “broadband gap,” not only with regard to the lack of access in rural areas to service that meets the broadband threshold, but also with regard to the lack of availability of faster service between urban and rural America. This report identifies opportunity costs that arise from this gap. These costs exist today, but the pace at which data transmission capability is growing means that the inequality between the technology being newly deployed and the technology that was deployed a decade or more ago is increasing. Networks that connect research institutions in the United States can move 100,000 times more data per unit of time than the dial-up connections that some Americans still must use. The technology gap is not a fixed deficit that once filled, stays filled. The technology gap will be larger—much larger—in the future, along with the information and technology gap, unless significant action is taken to overcome it.

Not exactly a ringing declaration of clarity.

Tellingly*, the report doesn't directly address the reluctance of telecommunications providers to bring broadband to rural areas.  And there's no mention of the numerous examples of state legislation to deny alternative approaches.  For example, you won't find the term "community area networks" used in this report.


From Community Broadband Networks, a project of the Institute for Local Self-Reliance.

Mediacom Continues Obstructing Rural Broadband Rollout in Lake County Minnesota.  (8/2/2012)
Excerpt:  What we have here is a company that wants to block a project that will deliver essential infrastructure to thousands of people who are presently lacking access. Why? Because part of that project will overlap with an outdated and overpriced Mediacom cable network that prefers its subscribers to have no choice in providers.

Rural Kentucky Telephone Access Threatened by Additional Legislation. (3/13/2012)
Excerpt: These de-regulation measures are being crafted by AT&T and would also benefit competitors Windstream and Cincinnati Bell.  In fact the Lexington KY Herald-Leader's John Cheves reported that Sen. Hornback was flanked by AT&T executives during the panel.

Rural Wisconsin Residents Struggle to Connect to the Internet.  (2/6/2012)
Excerpt: Unfortunately, AT&T's incredible influence in the state capital has made it more difficult for communities to build the networks they need -- even in places like Columbia County where AT&T is not and will not connect rural residents. Such is the price of living under governments that make policy based on the interests of powerful special interests.
Posted by Retiring Guy at 11:01 AM