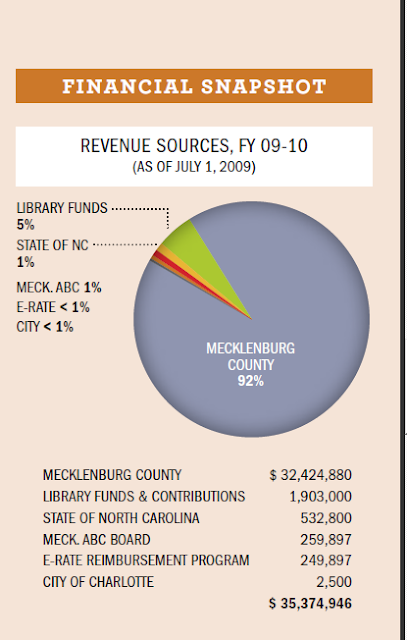 Excerpt:  "Let me assure you, we will not raise taxes," she [Mecklenburg County Chair Jennnifer Roberts] said. "We simply will not add more economic distress to our community through additional taxes in an economy with an unemployment rate over 12 percent."
The remarks came on tax day and as school and public library leaders made plans in anticipation of severe county budget cutbacks.

Commissioners have previously signaled they would oppose a property tax hike, but Roberts' statement was the most unequivocal from the leader of the board's Democratic majority.

Commissioners are scheduled to vote on a final budget in June.

A nose dive in sales tax revenue, debt obligations and fallout from the nation's economic downturn have already led to reduced hours at public libraries, less maintenance in parks and lower staffing in code enforcement.

It looks as though the worst isn't over for Charlotte Mecklenburg libraries.

Charlotte Mecklenburg libraries haven't seen such large-scale reductions since the Great Depression. (3/17/2010)
Posted by Retiring Guy at 6:16 AM