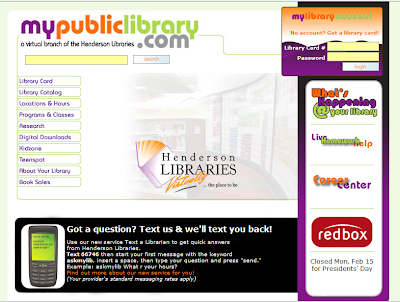 Excerpt: Henderson is one of many locations chosen for Redbox’s national trial. Other locations include Charlotte, N.C., Lexington, K.Y. (???!), and Orlando, Fla., said Brian Downing, a cofounder of Library Ideas, the company that provides marketing for Redbox.

Redbox has a waiting list of about 200 libraries that want to become kiosk locations, Downing said.

“It scratches an itch,” he said. “It turns the library into a 24-hour branch, whereas the library typically closes for 8 to 10 hours each night.”

Participating libraries receive 3 percent of the money Redbox makes at their location, he said.

Downing said the Henderson libraries were chosen because they are known as a “progressive location that was receptive to new initiatives.” (Emphasis added.)