The Privileges: This Must Mean That We Don't Get It 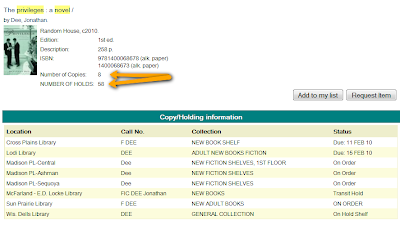 Excerpt: Given the reviews so far, it seems you either get Jonathan Dee’s fifth novel, The Privileges, or you don’t.

Except for Janet Maslin, who, in today’s New York Times, says it’s “excessively cryptic, but this story is so invitingly told that it’s much easier to be drawn in than turned off.”

The book rose to #108 on Amazon two weeks ago, based on a very strong review in the NYT BR. Holds are heavy in several large libraries, on very modest ordering.

58 holds in the LINKcat consortium of 41 libraries is a decidedly modest amount.
Posted by Retiring Guy at 5:47 PM