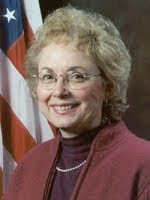 Excerpt: Wisconsin politics may not have heard the last of Judy Robson.

The Democrat state senator from Beloit says she is considering a run for higher office — the post of lieutenant governor.

Robson said she has not made up her mind, but confirmed she may seek the office.

She said she has known the likely Democrat nominee for governor, Milwaukee Mayor Tom Barrett, for many years and is certain she could work well with him in Madison.

Barrett has ties to Beloit. His wife, Kris, is a former resident of the city.
Posted by Retiring Guy at 12:04 PM