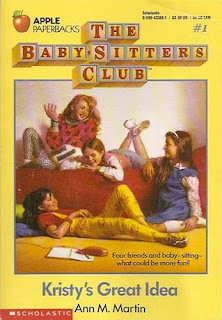 Excerpt: Taking a page from Broadway and George Lucas, Scholastic Inc., the children’s book publisher, is trying for a revival — with a prequel attached.

In April the company plans to reissue repackaged and slightly revised versions of the first two volumes in one of its most successful series, “The Baby-Sitters Club,” in the hopes of igniting enthusiasm in a new generation of readers. And just as Mr. Lucas brought “Star Wars” back with a whole new arc of stories that began before the original series, Scholastic is publishing a newly written prequel, “The Summer Before,” by Ann M. Martin, the original author of “The Baby-Sitters Club” books.
Posted by Retiring Guy at 10:48 AM