Thanks to Sen. Jon Erpenbach for the great quip. 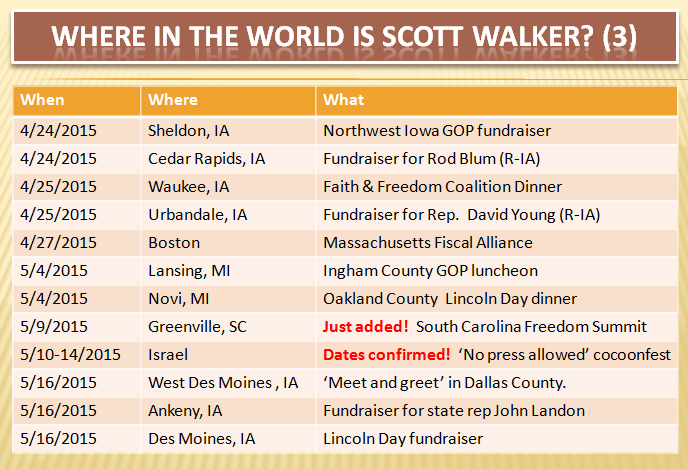 
Walker plans to visit Israel from May 10 through May 14, according to AshLee Strong, spokeswoman for Our American Revival, Walker's political nonprofit organization. She said details of the visit are still being worked out. The group has not invited media to accompany him on the trip.


Details still being worked out?

Nearly 4 months ago, Scott Walker announced the likelihood of his leading a trade mission to Israel.   Here it is 5 days before his departure and his itinerary is not yet in place.

It must be Jim Doyle's fault.

Related posts:
Without a hint of irony, Scott Walker trumpets Wisconsin tourism in his latest weekly e-update.  (5/2/2015)
It's becoming a daily routine to update Scott Walker's presidential campaign travel schedule.  (5/2/2015)
Scott Walker adds a couple of stops to his Iowa itinerary.  (5/1/2015)
From Iowa to Massachusetts.  (4/28/2015)
Scott Walker runs to the arms of Iowa Republicans for approval.  (4/17/2015)
Where in the world is determined presidential candidate/distracted Wisconsin governor Scott Walker?  (3/16/2015)
Furiously campaigning for the Presidency, Scott Walker travels on the Wisconsin taxpayers' 'dime'.  (3/4/2015)
Posted by Retiring Guy at 8:13 AM

Sure there is an itinerary. It's the "Give Me Money and Make Me Look Tough" tour.