Philosophical Realignment of the Carol Stream Public Library Board of Trustees 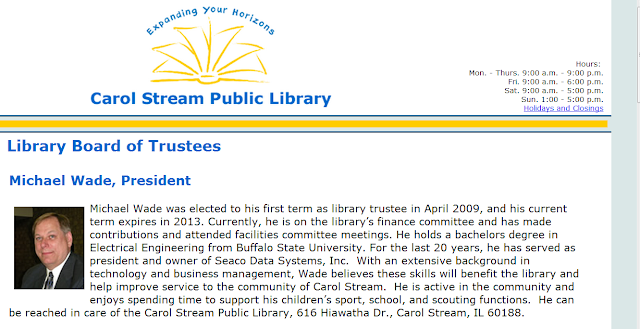 The vote was 3-1.  The library board has 7 members.  If the 9 comments to this article are any indication -- all expressing outrage over this action -- we haven't heard the last of this story.

Excerpt:   In May, the philosophical alignment of the board moved markedly to the right, with the appointment of two trustees, Susan Galle and Jerry Clark, who Wade met as organizer of the Chicago West Patriots Tea Party. Two other trustees already on the board, David DeRango and Dominick Jeffrey, previously ran on the same slate with Wade, in opposition to what they said was high library taxes and improper spending by Kennedy.

Many of them were outspoken opponents of earlier plans to construct a new library on library-owned property on Kuhn Road — a proposal that’s been rejected three times by voters. Kennedy predicted it’s only a matter of time before the board considers selling that land, which the old board voted 4-3 to retain.

Excerpt:  The race for four seats on the Carol Stream library board has evolved into a war of written words. The challenging slate has put up the red, "stop referendums" placards, which are plentiful in the area surrounding the library.

There's a downside to everything.

Wonder who's going to want to snag this director's job?
Posted by Retiring Guy at 1:05 PM