If There is No Constitutional Requirement to Live in the District, Why Did Ribble Go Through This Charade?

But it does beg the follow-up question:  How would the voters of the 8th Congressional District reacted if Ribble had been honest with them? 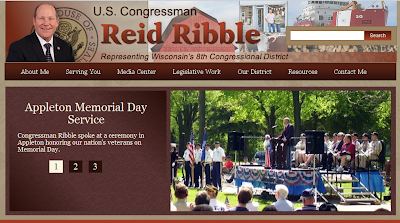 Excerpt:   U.S. Rep. Reid Ribble confirmed reports Tuesday that he recently moved out of the 8th Congressional District and returned to his family's three-bedroom home on Lake Winnebago in Sherwood, a house he left more than a year ago to challenge incumbent Democrat Steve Kagen in last fall's midterm election.

Consequently, Ribble is no longer a voter in the district he represents in Congress. Ribble's Sherwood home is in the 6th Congressional District, where Republican Tom Petri is the incumbent.

Ribble defended the move by asserting, "Northeast Wisconsin is my home and always will be."

"I have a long and personal tie to the 8th District and assertions to challenge this are just ridiculous," the Republican congressman wrote in a statement. "I grew up in Appleton, went to Appleton East High School and coached volleyball at Appleton East High School for over 20 years. My roofing business was located in Kaukauna and my wife's longtime bookstore was also in Appleton."

Haven't been able to find the name of the bookstore.

Ribble notes in his campaign bio that he's an "avid reader" but makes no specific mention of what he likes to read.
Posted by Retiring Guy at 8:02 AM