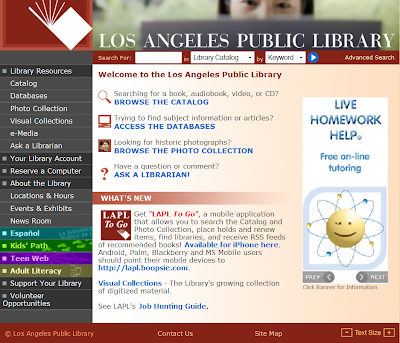 Excerpt: Today, students in Los Angeles are still venturing to public libraries — and in huge numbers. A recent survey by the Los Angeles Public Library system shows that 90,000 young people, or 15,000 students a day, visit one of the city's 73 libraries every week. With most LAUSD schools starting up this week, libraries soon will be packed.

Many public library systems — the five biggies are Boston, New York, Chicago, Detroit and Los Angeles — have faced an ugly two years of recession-spawned budget cuts and trimmed hours. Yet political leaders who control the purse strings for the biggest cities fought and saved their libraries from severe harm.

The city that has not done that is Los Angeles.

Here, Mayor Antonio Villaraigosa executed an unprecedented, and punishing, raid on the libraries. Last spring he convinced the City Council to close the city's central and eight regional libraries on Sundays, then slashed $22 million from the 2010-11 budget and closed all 73 libraries on Mondays beginning July 19.