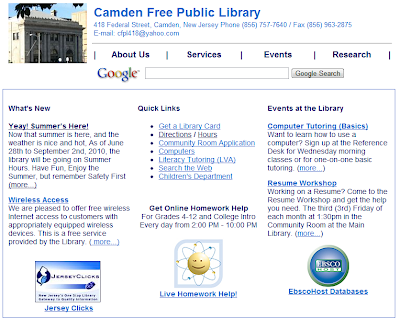 Excerpt: The mayor of one of the nation's poorest cities is working on a plan to keep the city's three libraries open and available to residents after the library board announced last week they would be closed due to budget cuts.

Camden Mayor Dana Redd said today that city officials will look to join the county library system and allow patrons to check out books from the library at Rutgers University's Camden campus.  [Search the Paul Robeson Library's online catalog for recent popular titles.]  The City Council must approve joining the county system, and there is no guarantee that in doing so the libraries will remain open. There is also no guarantee that the 21 city library employees will keep their jobs.  [And what is the City of Camden going to bring to the county library system table?  According to statistics collected by the New Jersey State Library, expenditures for the Camden County Library System totaled $4,823,197 in 2008.  Somehow I don't think Mayor Redd's $281,666, her most recent offer to her city's library, is going to win friends and influence people at the county level.

The library board said it would close the libraries by the end of the year because of a nearly 70 percent cut in library funding this year.

*As reported on 8/9/2010:   Mayor Redd:  "I cannot make this any clearer: Never has it been the intention of my administration ... to close any of Camden's libraries."
Posted by Retiring Guy at 9:45 PM