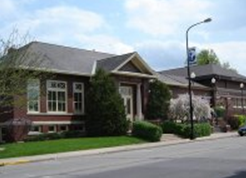 Excerpt: City Council granted the New London Library/Museum Board authorization to choose a future site for a library, during a special meeting held last week. The motion, which passed 7-3, did not include any financial commitment from the City.

Some council members were hesitant.

Alderwoman Lori Dean was skeptical, stating she thought her constituents would be upset over the vote. "I've had several calls from residents saying they don't want a new library," said Dean.

[Sound of alarm clock blaring.] Lori, it seems as though "several" of your constituents would be upset with ANY vote on where to site a new library.
Posted by Retiring Guy at 7:03 AM