About that Pocatello Idaho plant that Heinz closed in 2013 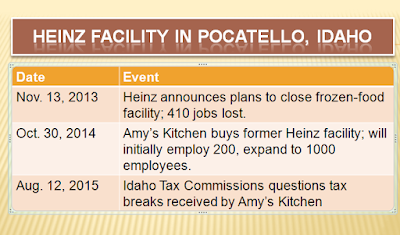 Brought to you by Berkshire Hathaway and 3G Capital


In addition to the 410 direct jobs lost, Cravens estimates another 200 employment positions could be adversely impacted by the Heinz closure. The Idaho Department of Labor lists Heinz as one of the 11 largest private employers in Bannock County.


Under economic incentives offered in Idaho, Amy's Kitchen will be eligible for a 26 percent credit on income, payroll and sales tax for up to 15 years. It's estimated that credit could be worth as much as $6.7 million


Based on my reading of the above, and other related, articles, I didn't find any evidence of heavy lifting on Heinz's part to sell the Pocatello facility.

Wisconsin State Journal, 11/7/2015
The company cited examples in Florence, South Carolina, Pocatello, Idaho, Leamington, Ontario and in Phoenix, she said. In the past two years, facilities owned by Kraft or Heinz were sold to companies that operated the facilities with a similar purpose.