Paying Dearly for the Privilege at the Copperas Cove Public Library

No package deals.  In Copperas Cove, about 70 miles northwest of Austin, a 2002 ordinance mandates a $200 fine for each library item that goes unreturned 20 days after a written notice is sent demanding its return. If the fine isn’t paid, the municipal court issues a warrant, city spokesman Kevin Keller said. Keller said he didn’t know how many people had been jailed on library-related offenses. 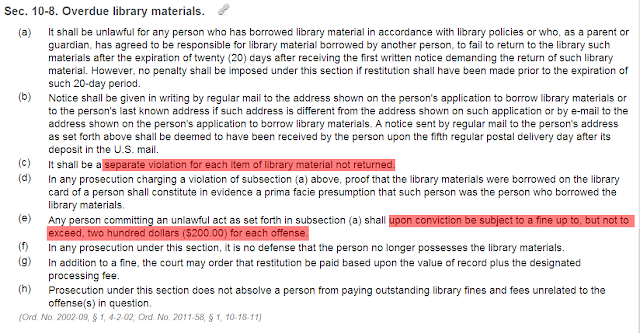 It adds up to $200 per item?  Copperas Cove City Municipal Judge Bill Price told KWTX that the law which saw Enck arrested was passed almost four years ago. Its intention was to offset the cost of replacing library materials.

According to the Christmas Day AP article, Judge, the ordinance was established in 2002.  11 years ago.  D

What do the locals think?  However, Copperas Cove residents are opposed to the law that they are forced to live under.

“Universal hatred, nobody wants to get arrested over a library book," added Judge Price. "The other side of that is people that go to our library and can’t have these materials, they’re put out too.”

Surprisingly, library warrant arrests happen often in the tiny town.
Posted by Retiring Guy at 7:37 AM