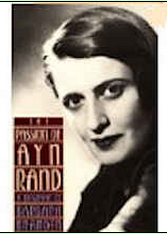 What it's all about?   Ms. Branden’s biography, “The Passion of Ayn Rand,” published in 1986, four years after Ms. Rand’s death at 77, was a generally admiring portrait. Baring details of a famously guarded émigré’s life, it recounted Ms. Rand’s affluent childhood in Russia, her family’s penury after the Bolshevik Revolution, her self-assurance from an early age about her own greatness, and one revelation that was a bombshell.

LINKcat holdings.  (4 out of a possible 51 library locations.  Doubtless some copies were weeded.)

Damning with faint praise? It is difficult to accord an important place to Ayn Rand either as a novelist or as a thinker. And yet there is something appealing, even a touch of grandeur, about the figure who emerges from Ms. Branden's somewhat tortured account: