Massanutten Regional Library has a Bookmobile for Sale 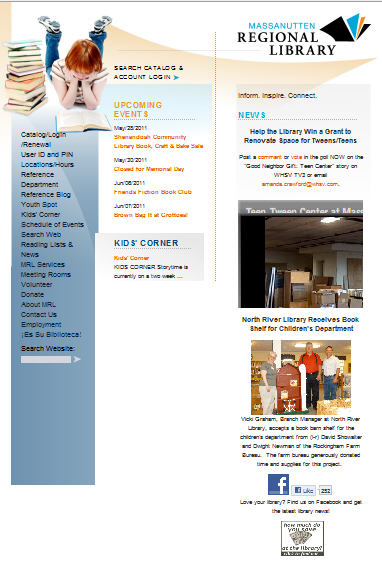 LINK
from a publib posting 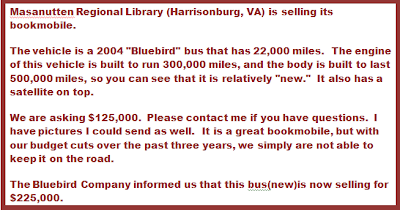 Excerpt:   You may have seen it around already, a once-anonymous silver van, which has become a rolling billboard for Massanutten Regional Library, revealing the library's new logo.

It depicts a tree of knowledge growing out of an open book, with a lovely backdrop of blue mountains.

We wanted a logo that reflected our mission, as well as represented the entire region our libraries serve, said Phil Hearne, director of the library system.

In the next several weeks, this attractive logo, designed by Matt Clark, from the local company, `Signs by Matt,` will be popping up in a number of ways. The new library cards will feature the logo, as well as the library's newsletter and other library publications. Also by the first of April, the largest and splashiest use of the logo will be revealed. The library's bookmobile will be completely repainted and the new logo will be applied like a giant mural along both sides of its 32-foot length, and across the back. To accomplish this transformation, the bookmobile will not be in service the week of March 11-15.

Ever since the Rockingham Public Library changed its name to Massanutten Regional Library two years ago, there has been a gradual changeover and name recognition campaign underway.