But first, a little refresher. 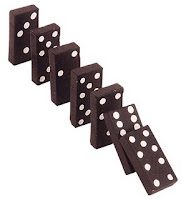 Excerpt: A sprawling Southern metropolis, Atlanta has become one of the biggest laggards in the economic recovery. In November, prices of single-family homes were down close to 12 percent compared with a year earlier, the largest decline among major metropolitan areas, according to data released on Tuesday in the Standard & Poor’s/Case-Shiller Home Price Index. Home prices regionally are now below their levels of 2000, making Atlanta one of only four metro areas to have experienced such a slide. The price of entry-level housing in the area — the lowest tier of the market, valued at just under $96,600 — fell by close to a third last year.

Where the region once attracted thousands of prospective home buyers drawn by plentiful jobs and more affordable living, that influx has dwindled. Local unemployment, at 9.2 percent, is slightly higher than the national rate, in part because one in every four jobs lost was connected to real estate [which is why my sister-in-law Kim's brother is back in Pennsylvania], a much higher rate than in the rest of the country. Those jobs have yet to return, while even people with work are having trouble qualifying for loans.

Excerpt;    Starting with the first session Thursday, the commission’s budget committee wants to hear from every department and office about their expenses. Part of the presentation must also include how offices would operate with a 5 percent or 10 percent cut to their individual spending in Chief Executive Burrell Ellis' proposed $547 million budget.

That would include this department, I assume.