Is It Just Me or Are Things Heating Up in Troy Michigan?

LINK
From the description:     The library in Troy, MI has failed two elections to secure additional tax revenue to stay open. One more vote is slated for Aug 2. If this one fails, the library will finally close for good. But what about all those books you ask? We're going to have a book burning party on Aug 5! Help get the word out. Vote to close the Troy library on Aug 2.

This Facebook page is such a misguided attempt at satire I have to wonder if it was created with a strategy of reverse psychology in mind.  Give the pro-library forces an added incentive to get out the vote.

At least outwardly, Troy Citizens United have remained aboveboard in their fight against the vote to increase the library tax. 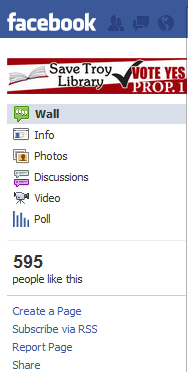