Troy (Michigan) Public Library to Close on May 1 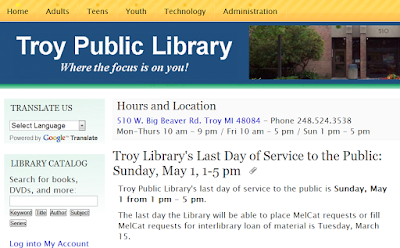 Excerpt: An effort by a Troy City Councilman to allocate $1.7 million in unspent appropriations for the city’s library failed to even make it onto the agenda at Monday’s Council meeting, meaning the library will close April 30.

Troy is not the first metro Detroit community to close its public library. Highland Park shuttered the McGregor Public Library in 2002.

But Troy, unlike Highland Park, is an affluent upper middle-class suburb. It’s not the kind of place where one expects budget shortfalls will close a library.

Not that I'm drawing any conclusions.  It just occurred to me to google "tea party" and "Troy Michigan".