A Multi-Million Dollar Troy Public Library Collection Up in Flames? Not Gonna Happen 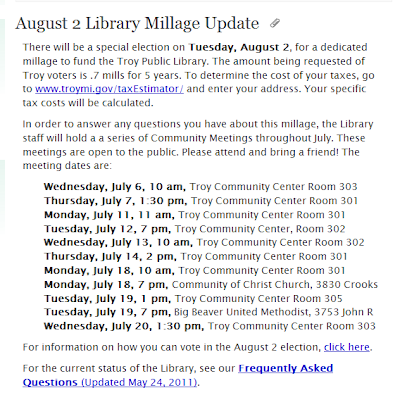 Getting the word out
Group promises book burning party if millage to save Troy Public Library fails. (Oakland Press, 7/7/2011)

Excerpt: Phillip Kwik, head of the public services department at the library, said at first he thought the tweets were satire, but after seeing signs pop up in the city and learning that a ballot access committee named Safeguarding American Families is behind the movement, he’s not so sure.

“(When I first learned of the movement), I thought ‘This is some bad attempted satire,’ but to spend money on signs for a committee, that’s not somebody forming it as a joke,” Kwik said.

“We’re, of course, concerned. It’s a threat against the library and city property, public property.”

Though the wording is ambiguous, the signs and social media accounts seem to indicate that the library’s books would be burned just days after the measure fails. Kwik said that will not be the case.

“We are preparing to inventory (the books), reconcile our book records and patron records, do all that, then to mothball them in the building in the event that at some future time the library might reopen.

This latest turn of events in Troy, Michigan, led me to contact Cathy Russ, Director of the Troy Public Library. Yesterday I sent her the following email message.

My name is Paul Nelson. I'm a retired library director -- 22 years at the Middleton Public Library, a suburb of Madison -- and now wear a variety of hats: Interim Director (just finished 4 months at the Menasha Public Library, Adjunct Assistant Professor at the UW-Madison School of Library and Information Studies, blogger (Retiring Guy's Digest, among others).

I've been following the situation in Troy since April 2010. Yesterday I was sent an anonymous comment on a 6/26/2011 post that included a link to a very odd Facebook page.

Just curious to know if you have any idea who's behind what strikes me as a misguided effort at satire. Are there actually August 5th book burning signs placed at various locations in Troy or is were they just placed in certain locations for the photo ops? I'm aware that Troy Citizens United is working against the library tax, but they don't have anything so "incendiary" on their website.

Would appreciate any enlightenment you can offer.

And best wishes on the outcome of the August 2nd vote. I'm certainly rooting for the library!

She quickly and very graciously provided a detailed and very informative response, which she has given me permission to share.

I wish I could tell you if this were someone's idea of a joke (sick!), or, as some have speculated, an attempt at reverse psychology to get people to vote yes. But those signs cost real money, and it takes time to put them out, as well as to file paperwork with Oakland County to register as an organization. More money than brains and too much time on their hands? Who knows? And this Tom Ball, who filed the paperwork, said he had to talk to his “board” before he could comment, which is also pretty weird. I will keep you posted!

At this point, after 2 years of this craziness of "will the library close?" and all the twists and turns in that road, you have to get up pretty early in the morning to throw me a curve ball. My staff and I just do our best to provide the very best possible service to our community, and do our jobs. Having said that, I am finding that vodka helps as well. ;-) There are many people pulling for us (like you!), and that helps enormously.

And, FYI, I am an adjunct professor @ the Wayne State U Library and Info Science program. If you ever need a guest lecturer on “How to Survive a War” (or really, how to handle crisis situations in libraries), I would be happy to do it. I feel very strongly that, while I hope no one ever has to go through this kind of situation, if there is anything I can ever do to help someone prepare for it, avoid it, or deal with it, I want to do it.

I just hope I'll be teaching the Public Library course in the Spring 2012 semester so I can take Cathy up on her offer.

In the meantime, if you know anyone in Troy, Michigan, please send them this message.