'Meet you at the Cube' 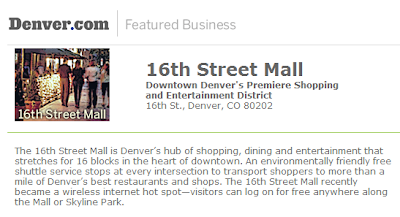 Entrepreneur Molly Graham describes her concept as a 21st-century newsstand. It will feature flat-panel TVs displaying breaking news and popular sports events, and music will sometimes play from the stand. In addition, the cube-shaped stand located on the median strip at 16th and California streets will sell more than 400 magazine titles and 15 different newspapers, including The Denver Post.

Outdoor newsstands are nothing new, but when Graham moved back to Denver from Los Angeles, she wondered why the growing city didn't have one.

"I'm the impulsive person that buys all the magazines," she said. Now, Graham wants her self-funded newsstand to draw large numbers of passers-by like the ones she used to see in Los Angeles.

It's been quite a few years since I've made an impulsive magazine purchase.  (Anyone else still miss Pic-a-Book?  Used to be next door to the Exclusive Company on State Street in Madison.  Stocked a great selection of magazines.)  And now that I almost always use the self-service option at grocery stores, I rarely get to browse the covers of National Enquirer and all the rest of 'em.  Best of luck, Molly, but I think the era of the newsstand, open-air or otherwise (see pic that accompanies the Post article), is passing us by.
Posted by Retiring Guy at 5:06 PM