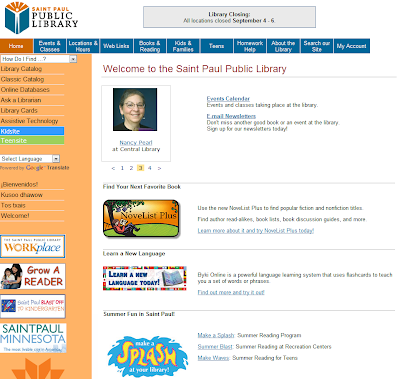 Excerpt:   Here's a word you don't hear much of these days when it comes to libraries: expansion.

The St. Paul Public Library system would gain the equivalent of half an employee next year, growing to 169.4 workers, up from 168.8 today, under a budget proposal unveiled this week. That's modest growth by any definition, but it's a step in the right direction, say library stewards, given the virtual bloodletting that occurred a few months ago when the library system shed 19 positions, or 10 percent of its staff.

The 6/10ths of a position is funded by a grant from the Friends of the St. Paul Public Library.

Some additional budget maneuvering means that several libraries that close at 8 p.m. weekdays would be able to stay open until 9 p.m. as necessary, allowing the Friends group to continue author readings and the like past closing.

"In some libraries where we're closed at 8 instead of 9, it kind of kills programming," said library director Kit Hadley during her presentation to the St. Paul Library Board this week.
Posted by Retiring Guy at 6:43 AM